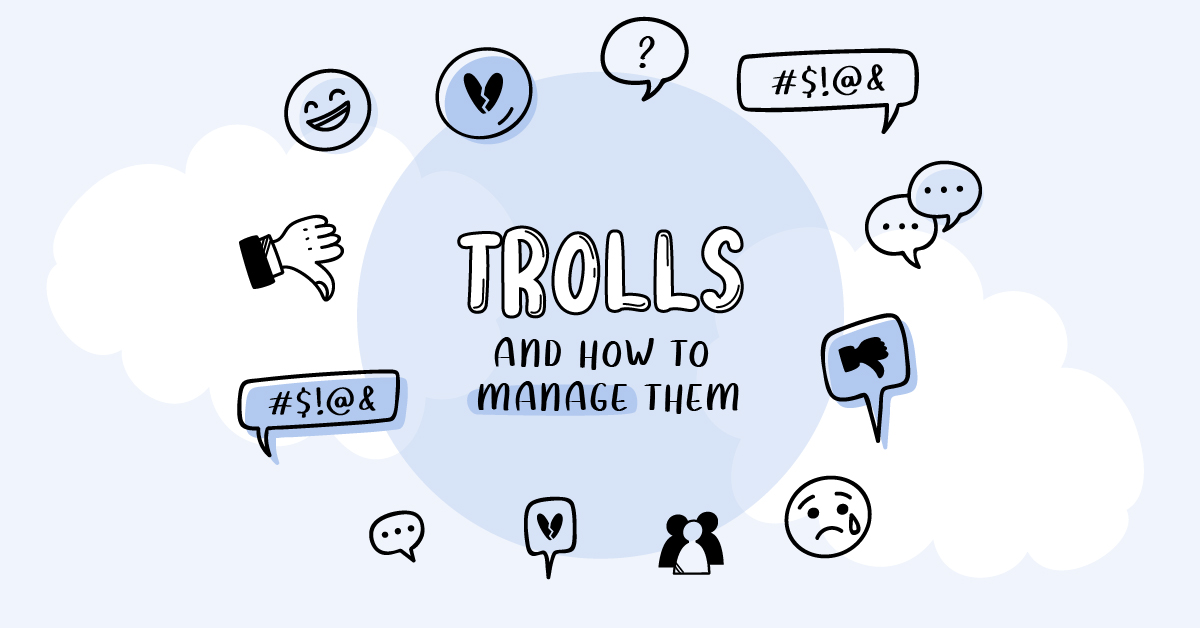 Many of us have different thoughts that come to mind when we hear the word “troll”. For some, it’s the story of the “Three Billy Goats Gruff and the Troll under the bridge”, for others it’s the small gremlin-like creatures with a lot of hair that we used to play with as kids. In today’s society, online trolls have merged from being monsters in movies and stories to everyday people who sit behind a keyboard and write hateful comments or messages to a person or business. In this blog, we will discuss trolling comments and how to manage online trolls when they pop up.

What exactly is an online troll?

Many of us throw the term ‘troll’ around quite loosely and when we hear someone is ‘be trolled’ it just means that they’re playing a prank on them or joking around online. However, the Cambridge Dictionary defines an online troll as “someone who leaves an intentionally annoying or offensive message on the internet, to upset someone or to get attention or cause trouble” and many of us have often been on the receiving end of a not-so-nice comment. But it’s when these comments appear frequently and can often be the opinion of a small group of people that they can start to cause harm to your business.

Trolls are often seen as mythical (see above regarding trolls under the bridge!) but that’s not the kind of myths we’re talking about here. Some of the most common myths surrounding online trolls today include:

• Who they are – It’s easy to get sucked into the thinking that an online troll is a young teenage dropkick in his mum’s basement, or an old creepy man preying on the innocent, but this isn’t always the case. “Troll Hunting” author Ginger Gorman told the ABC that trolls usually don’t operate alone – they operate in “well-organized international syndicates” that often work together to target a specific victim – scary, right?

• Their education – Like the point above, when we think of a troll they are often (in our minds) an uneducated or ignorant person. Many trolls are actually quite educated, and a lot of the time don’t even believe what they are typing – they simply do it to get a reaction.

• That they can’t hurt you – this is probably the most terrifying myth on the list. When we hear the word “online troll”, our comfort is that they are “keyboard warriors” who can’t actually hurt us. Unfortunately, while this may be the case in some instances, there are some bad people out there who do some awful things. Sherele Moody, the founder of the anti-violence Red Heart Campaign, received some awful backlash, including trolls sending her death threats, as well as poisoning her dog, and killing her horse.

Is it a troll or just a bad review?

Ok, so we know that we said that trolls leave negative comments with an aim to hurt people or businesses, but that doesn’t necessarily mean that every single bad comment has come from a troll. The difference between a troll comment and a general negative comment or bad review is the negative comments and/or reviews generally come from someone who has had some sort of bad experience with your business or a staff member. Trolls are usually people from anywhere across the internet who are picking at a weakness to try and draw an emotional response. It’s important to be able to tell the difference between the two, as the way to initially manage an online troll is not always block and delete. If you’re still unsure if it’s a troll that you’re dealing with, Hootsuite has put together five tell-tale signs that you’re dealing with a troll, which you can read about here.

I know what they are, and how to spot them now, but how do I manage trolls?

Ahh yes, you’ve made it this far because you want the magic solution to manage trolls and keep them off your page for good. I hate to be the bearer of bad news, but unfortunately, there is no hard and fast way to get rid of them and they’re not going anywhere any time soon. While pressing delete and block seems like a sure way to get rid of them, it’s often not the most effective solution.

We asked Oraco Agency Comms Director, Jessica Humphreys, her thoughts on online trolls. She said, “As I’ve worked in the social media space for some time, I’ve seen my fair share of online trolls. In some instances, there’s been little impact on the business, but in others, the impact can be insurmountable.

Where possible, it’s best to be proactive. Have a plan for how you want to manage trolls should you experience them. Do what you can to prevent them by taking your online security seriously and having an issues and risk management policy in place.”

Here are some ways we suggest trying to manage those pesky trolls:

You may have noticed that social media sites like Facebook and Instagram have ‘community guidelines’ in place to show what you can and can’t post online – you can create something similar for your business. This will give you the opportunity – if you find any hateful comments on your posts – to direct the commenter back to your community policy with a simple “Hey, friend! Just sending you a reminder about our community policy, which you can find on our website”.

2. Give them the silent treatment

Trolls live off drama so engaging and adding fuel to the fire is typically not the best response. Their sole purpose is to start fights and get a reaction out of the person or business targeted. What’s one way to ensure you don’t give them what they want? Don’t respond. This will deprive them of the satisfaction they’re after. Unfortunately, just because you choose to ignore them, other followers may not which will undo the effect you’re after. Also, if their comment contains threats or hate speech, this probably isn’t the best method.

What’s one way to shut the troll’s trash talk down? Give them some straight-up facts! If you experience a troll commenting or spreading misinformation about your business, it’s important to respond to these claims quickly as you would with an unhappy customer, it’s important to act swiftly as soon as you see the negative comment come in, to stop any rumours from forming. Instead of ignoring or denying what they’re saying, address their comment and disprove what they’re saying with the correct information.

4. Diffuse the troll bomb with a little bit of humour

We’ve all seen and laughed at companies who respond to not-so-nice or trolling comments with a little bit of witty humour. It is important, however, if you opt to go with this response that you are pulling the joke off, as if the joke is a flop, this will give the troll more ammunition. Below are a couple of examples of how companies responded with witty remarks:

5. If all else fails, block or ban

Sometimes, the only option that you have left is to block or ban the troll in question. If things go too far and escalate into threats or hate speech, you have every right to block or ban them from your page. If things do take a more serious turn, most social media networks have an option to report accounts, where they will then consider banning the account from the entire platform. However, Jessica says that “unless your troll has communicated hate speech or named a staff member don’t delete their comments. Trying to silence a troll will often cause them more outrage and encourage them to keep ongoing. Where possible, fight their fake news with facts or ignore them.”

More recently, Instagram put out an option that a lot of celebrities or people who deal with controversial issues (like politicians) choose to take up, where you can turn off commenting altogether. This removes the opportunity for trolls to easily leave a comment. Facebook has also bought out a feature where trolls have been put on notice for negative comments or spam, and businesses are given the option to ban people from commenting on posts. In December 2020, the Australian Government proposed online safety legislation where social media platforms would need to remove severely harmful, abusive, or bullying content within 24 hours, or risk being blocked and fined a whopping $555,000. This move was set to hold platforms accountable for blocking and deleting harmful comments, which run the risk of doing further harm.

Making sure you understand the difference between online trolls and negative reviews is crucial for your business. A bad review doesn’t always have to be seen as a negative thing by a business. They can sometimes draw attention to areas of your business that may need a little bit of work, and there are plenty of reasons as to why negative comments may not be a bad thing. Trolls on the other hand, always provide a negative experience for a business, with the level of toxicity higher depending on what they are commenting. When you manage trolls correctly though, they will just blend into the background as another small business hurdle that pops up from time to time.

If you need some help managing trolls (whether they’re under a bridge or on your social media page), we’ve got you covered! Chat to one of our team members today.

4 thoughts on “Online Trolls and How to Manage Them”